The 15 best entries for Dezeen's Redesign the World competition powered by Twinmotion will be revealed during our Dezeen 15 festival, which starts next week.

The Redesign the World competition, which we launched earlier this year with Epic Games, called for radical new ideas to rethink the future of planet Earth.

"Entrants really grappled with the challenge set down by the contest and we were very impressed by the quality of entries," said Fairs.

"There was a wide variety of ideas, from elevated cities to underground habitats, and lots of imaginative solutions for solving the climate crisis. This made it difficult to judge, but the 15 selected proposals all present interesting ideas that will provoke lots of discussion about the future of our planet."

"While the sheer number of creative solutions is impressive, it is the unbounded imagination of the winners and their ability to use technology to think and build at planetary scale – for a better world – that we find to be truly humbling," said Ercan.

"This experience has been nothing short of inspiring and mind-blowing for the Twinmotion team, and we would like to thank everyone who contributed to its success."

Fifteen best proposals to be published during Dezeen 15

From the 15 finalists, the judges have also selected an overall winner, a runner-up, two joint third-placed entries and one highly commended entry.

Dezeen will be publishing one finalist a day from 1 November, culminating in the announcement of the winner on 19 November.

The Redesign the World competition, which was free to enter, called for new ideas to redesign planet Earth to ensure it remains habitable long into the future. 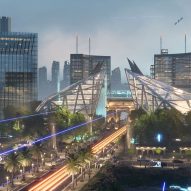 Watch our talk about how game engines are transforming architecture

For each finalist, Dezeen will publish a still render and a short video created in Twinmotion to showcase their proposal.

The Redesign the World competition ties in with Dezeen 15, a three-week festival to celebrate Dezeen's 15th birthday.

The festival will see 15 creatives including Es Devlin, Winy Maas and Neri Oxman propose ideas that could make the world a better place over the next 15 years.

Each contributor has prepared a written manifesto and we'll publish one of these each day for the 15-day duration of the festival.

In addition, we'll conduct a live interview with each contributor, in which they'll present their idea and discuss it with Dezeen founder and editor-in-chief Fairs. View the schedule here.