The International Building Press (IBP) judges praised Hahn for her "versatility, maturity and an ability to dig out a story and raise awareness on subjects of importance".

The judges were particularly impressed with Hahn's work for Dezeen's Carbon Revolution series, which explored how the material could be removed from the atmosphere and put to use on earth.

Hahn joined Dezeen as a reporter at the end of 2019. The new journalist category recognises writers that have been covering the built environment for less than two years.

Dezeen honoured at IBP Awards for fifth year in a row

Hahn collected the prize at an awards ceremony in London last week where Dezeen was also shortlisted in the editorial brand of the year category.

Dezeen's editor-in-chief Marcus Fairs was also shortlisted in the architecture writer and construction writer of the year categories, while Dezeen's features editor Nat Barker was shortlisted in two further categories for his previous role at the trade magazine Inside Housing. 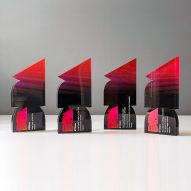 It is the fifth year in a row that Dezeen has been honoured at the IBP National Journalism Awards, which recognises journalists and media brands covering the built environment.

Nine awards for Dezeen this year

Hahn's IBP accolade is the ninth honour Dezeen has received this year.

Earlier this year, Dezeen also won a People's Voice Webby Award for the Out of the Box competition with Samsung, which challenged contestants to create objects for the home by repurposing television packaging.