Shieh Arquitetos Associados has organised this residence in Brazil around a lush courtyard so that its residents can "step onto grass from the bedrooms".

The Courtyard House for Two Boys was completed for a family with young sons in Vinhedo, a city roughly one hour's drive from São Paulo. The family needed to remain close to the city, but wanted a calmer environment where they could spend the majority of their time.

"Completed shortly before the pandemic, the house became a universe for parents and children," said Shieh Arquitetos Associados, a studio based in São Paulo.

A central courtyard is the organising element of the home, and is surrounded by standalone structures that contain the home's living and dining rooms, bedrooms, and pool.

"The courtyard, central to everyone, is the spirit of the place," said the architects. "From all rooms, rain can be seen watering the singular yellow Ipe."

"On a sunny day, one can see the children playing in the garden," they added.

Besides a mezzanine in the living and dining room, the 400-square-metre home is laid out on a single level.

"With young children, the preference was for a single-story house, where one could step onto grass from the bedrooms," explained Shieh Arquitetos Associados.

The residence occupies a corner lot, and is accessed via a short flight of exterior stairs that leads to a covered terrace links directly with the courtyard.

The living areas and pool frame either side of the central outdoor area, while three bedrooms at the back of the property also face onto the grass.

Each of these rooms has tall sliding glass doors that open to courtyard, creating continuity between the home's interior and exterior spaces.

Although each of these volumes is separate, they share a roof that runs continuously around the perimeter of the home. 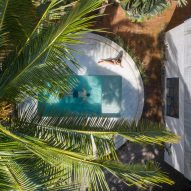 Plenty of plants atop this concrete slab help reinforce the courtyard's lush feeling.

There is also a terrace on the upper level that is accessible through the mezzanine in the living and dining room.

"With the creation a mezzanine, a double-height ceiling is established in the living room – which receives shading of a wooden screen on the face of the patio," said Shieh Arquitetos Associados.

"In terms of materiality, an austere palette has the aspiration that the construction can get better with the passage of time," it continued.

The structural concrete blocks, concrete beams, and panelised slabs were all left exposed.

"The finishes follow the same thinking: flooring is either hardwood or Portuguese mosaic stones," said the architects.

Shieh Arquitetos Associados was founded in 1976 by Shieh Shueh Yau. It is now a family business, which he runs with Leonardo Shieh, Irene Shieh, and Kathia Shieh in São Paulo.

Other projects in and aroun the Brazilian city include an apartment by Julliana Camargo for a fashion editor that uses a vibrant color palette and a single-family home that Superlimão converted to accommodate a yoga studio, co-working space, and rental apartment for an entrepreneurial family.

The photography is by Leonardo Shieh.