Designers Maarten Baas and Koichi Futatsumata have created a range of eating implements as part of a series of cutlery collaborations by Antwerp design label Valerie Objects.

Baas's cutlery is based on a set of imperfect shapes, designed to resemble drawings done by hand. Each piece features irregular exteriors and, in the words of Valerie Objects, "appears to have gone directly from the sketches to the factory".

The knives feature jagged serrated edges, and the entire set is made from brushed stainless steel that is also available with black or brass finishes.

"In a quick sketch beauty is often found, but those spontaneous lines are often lost in an industrial process," said Baas, who currently exhibiting a furniture shaped like turtle and beetle shells in New York.

Futatsumata's cutlery features octagonal stems – based on the shape of the Japanese designer's favourite technical pencil – with flat sections at the tips of the handles. The set includes a fork, a knife and a spoon along with a deep scoop-shaped oval bowl. 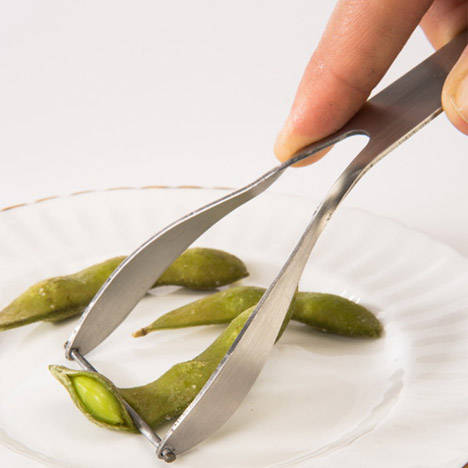 Futatsumata also leads architecture studio Case-Real, which has worked on interiors for a Japanese patisserie and wine bar, and a nursery school.

"When I approached the designers and design teams to create a set of cutlery for Valerie Objects, I knew that they would each use their expertise, background and knowledge to come up with a completely divergent range of results," said Valerie Objects co-founder Veerle Wenes.

"Some of them had already experimented with cutlery, others had been fascinated by the design for years, while for yet others it was their first foray into designing this modest eating tool," she added. "But whatever stage they were at, they all succeeded in delivering a surprise."

Both collections were presented at Paris trade fair Maison&Objet in January.

A variety of designers have put their spin on eating implements. Inga Sempé's range for Alessi features slender bases and gently tapered stems, Miguel Flores Soeiro shaped items by twisting the metal where the handle meets the functional end, and Nendo launched a set that looks as though it's been carved from flint.