Moshe Safdie, Studio O+A and actor Brad Pitt's Make It Right foundation are among the 11 winners of this year's National Design Awards, given annually by the Cooper Hewitt Smithsonian Design Museum in New York.

The recipients of the National Design Awards, widely considered the most prestigious awards for American design, were announced today.

"These designers and design firms cross disciplinary boundaries, explore innovative materials and develop new models of problem-solving in pursuit of these goals."

Amongst this year's recipients is architect Moshe Safdie, who has received an award for lifetime achievement. 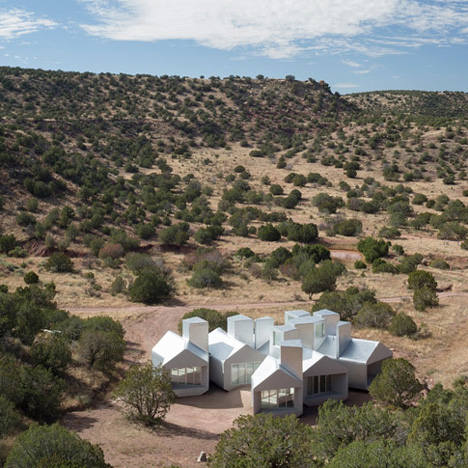 Safdie, an Israeli architect who is now based in Boston, is best known for projects including the Marina Bay Sands hotel complex in Singapore and Habitat 67, the experimental modular housing presented at the 1967 World Expo in Montreal.

His firm Safdie Architects recently completed a pair of housing towers linked by three aerial walkways in Singapore, and has designed a museum to honour American war heroes in South Carolina.

In an exclusive movie for Dezeen, Moshe Safdie claimed architects often fail to see tower blocks as a continuation of public space, but rather as independent objects. He said this has lead to disconnection in cities.

"We haven't cracked that issue, we haven't learned how to do that," Safdie told Dezeen.

Multidisciplinary designer Bruce Mau is to receive the Design Mind award, which recognises individuals who have made a significant impact on the design profession.

Mau founded his consultancy firm Massive Change Network in 2010, and has has worked on projects with Coca-Cola, McDonald's, Herman Miller, Walt Disney Imagineering and Freeman, as well as the governments of Denmark, Guatemala, Panama and Saudi Arabia.

He has also collaborated with architects Rem Koolhaas and SOM, along with Frank Gehry for whom he designed the exhibition spaces inside the Biomuseo in Panama.

Studio O+A, which has completed a number of high-profile office interiors including a glossy mini-campus for the firm behind the Uber taxi app, will take away the prize for Interior Design.

Actor Brad Pitt's Make It Right foundation that builds homes and buildings for people in need was awarded the Director's Award, while Marlon Blackwell Architects will receive the Architecture Design prize.

Other recipients include illustrator and designer Geoff McFetridge for Communication Design; Opening Ceremony for Fashion Design; Tellart for Interaction Design; Hargreaves Associates for Landscape Architecture; and Ammunition for Product Design.

Now in its 17th year, the annual awards were established to promote design as a humanistic tool. The award recipients will be honoured at a gala dinner 20 October 2016, taking place at the Arthur Ross Terrace and Garden at Cooper Hewitt.

A jury of design leaders and educators from across the country reviewed submissions nominated by the general public. Winners are selected based on the level of excellence, innovation and public impact of their body of work, and – unlike the jury-selected awards – the Director's Award is chosen by Baumann herself.